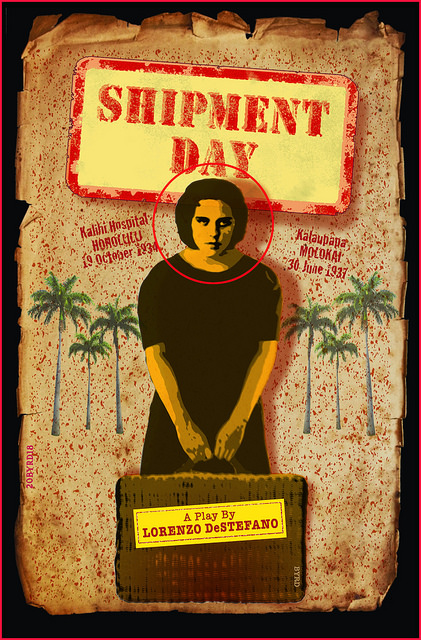 “Speaks to an important chapter in Hawaiiʻs history.”

“Shipment Day is about humans and our treatment of each other, about connection and yearning,
loneliness and fear, fulfillment, hate, ignorance. This piece has it all. Major standing ovation.”

“Immediately brings the far away past right to our doorstep, here and now,
in all its horrific, moving, tangible, shame-inducing intensity.”

Imagine that you have stumbled upon a family secret, a relative in exile that no one in your immediate family has ever spoken of.

Intrigued, you meet that relative, a Portuguese cousin, and spend the next seventeen years, until her death,

getting to know the circumstances of her life, her struggles and her quiet achievements.

Such was the case when Hawaii-born playwright & director, Lorenzo DeStefano, learned about his cousin,
Olivia Robello Breitha.

“SHIPMENT DAY” is set in Honolulu between 1934 and 1937 and dramatizes Olivia’s traumatic early life experiences.
It chronicles her diagnosis with the condition at 18, her two and a half year confinement at Kalihi Hospital,

to the day before her shipment to Kalaupapa, the Hansen’s disease settlement on Molokai where,

as Hawaii State Department of Health parolee #3306, Olivia would spend the next seventy years of her life,
until her death there in 2006 at the age of 90.

and past member of the Motion Picture Editor’s Guild. In addition to his work as a photographer he has worked in U.S. and U.K. Theater

as a playwright and director as well as written fiction & non-fiction.

about the early years of his cousin, the noted author and leprosy activist Olivia Robello Breitha (1916-2006).

The play was first developed as a One-Act at the Road Theatre Company in Los Angeles in 2015.
It won Best Play at the 2016 PlayBuilders of Hawai’i New Works Festival.

Commissioned by the Hawaii Performing Arts Company as a full-length play,

it received its world premiere during the 50th Anniversary Season of Honolulu’s Manoa Valley Theatre in Nov./Dec. 2018,

where it won Broadway World’s 2019 Award for Best Regional Play in Hawaii.

DeStefano’s play “Providence” is based on the screenplay by English dramatist David Mercer.

both productions helmed by the celebrated English director Jonathan Miller.

for which he received an L.A. Drama-Logue Award, Horton Foote’s “The One-Armed Man”, “Jitters”, by David French,

the world premiere of “Conversations With The Spanish Lady” by Pulitzer Prize-winning playwright Robert Schenkkan,

and the world premiere of “Twisted Twain”, a one-man show by Bill Erwin.

DeStefano is Producer/Writer/Director of “Shipment Day” (www.shipmentdayfilm.com), an upcoming  filmed adaptation of his prize-winning play.

He is Producer/Writer of “The Diarist” (www.diaristmovie.com), a 5-Part Limited Series inspired by the 17 million word “Inman Diary”

He is Producer/Writer of “House Boy”,  a 3-Part Limited Series and fact-based urban thriller set in London and South India,
adapted from his novel.

DeStefano’s narrative short film, “Stairway to the Stars” (www.stairwaytothestarsfilm.com), is based on his One-Act play.

Other original screenplays include the originals “Lads” and “Deep Inside”. Adaptations include“Cropper’s Cabin” (from the novel by Jim Thompson),
“Appointment in Samarra” (co-writer, from the novel by John O’Hara), “Waiting for Nothing”, based on the novel by Tom Kromer,
and “Creeps” (from the play by David E. Freeman).

DeStefano began as a street photographer in Honolulu. His work in Hawaii, California and Cuba has been widely exhibited.

His “Cubanos-Island Portraits” is in the Permanent Collection of MOLAA, the Museum of Latin American Art in Long Beach, California

His work as a producer & director of feature documentaries includes the 2018 Humanitas Prize-nominated
“Hearing is Believing” (www.hearingisbelievingfilm.com),about the astonishingly talented young musician and composer, Rachel Flowers.
He produced and directed “Los Zafiros – Music From The Edge Of Time” (www.loszafirosfilm.com),  a multi award-winning film about the Beatles of 1960s Cuba.
DeStefano also produced, directed and edited the acclaimed public television documentary “Talmage Farlow” (www.talfarlowfilm.com),

a portrait of the great American jazz guitarist.

“So very touched by this brilliant presentation. How blessed we were to be introduced to this inspiring lady.”

“History comes alive. How has a story like this not been told before?”

“Amazing show. Loved everything about it.”

“The characters are dynamic and well-rounded. A must see.”

“SHIPMENT DAY’ DESCRIBES THE SENSE OF FEAR THAT SURROUNDED A DIAGNOSIS OF LEPROSY, AND NOT ONLY FOR THE PATIENT.”﻿
-Radio story by Dave Lawrence & Catherine Cruz -Hawaii Public Radio 11.8.18
http://www.hawaiipublicradio.org/post/family-history-shapes-new-play-shipment-day﻿﻿

“SHIPMENT DAY’ HIGHLIGHTS DARK CHAPTER IN HAWAII HISTORY, A STORY ABOUT A LOCAL WOMAN WHOSE LIFE IS TURNED UPSIDE DOWN WHEN SHE IS DIAGNOSED WITH HANSEN’S DISEASE AND SENT TO LIVE IN KALAUPAPA ON MOLOKAI.”﻿
– Interview by Maleko McDonnell/ KITV 4 Island News 11.6.18
https://www.kitv.com/story/39426137/shipment-day-highlights-dark-chapter-in-hawaii-history﻿﻿

“Exciting, heart wrenching, and peppered with comedy to ease the tension here and there, Shipment Day invites you to experience Olivia Robello’s story yourself. ..poignant and beautiful…this is a very interesting and important story to tell.”
Hitting the Stage

The new edition of Olivia’s deeply moving autobiography,
“Olivia-My Life of Exile in Kalaupapa”, in print since 1988, is now available from